Hello Brawlers! Today, we will talk about the enemy design process of Mayhem Brawler. As you know, one of the core elements in a beat ’em up game is its enemies. We face enemy minions all through the gameplay. In Mayhem Brawler, an extreme amount of effort given to the creating best enemies possible.

Idea Behind the Level Designs

In Mayhem Brawler, our intention is to make the level give its own feeling and tell its own story instead of just giving out a few dialogue lines and creating minion chaos until the boss appears. Because we want to let players know what exactly is happening while they are beating minions to double death. Normally, enemy minions and combat mechanics are created firsthand. But instead, we jumped into the Mayhem Universe and inspected what our enemies would actually do, their characteristics and preferences.

So basically we created a game that would fit the universe instead of a universe that would fit the game. Also, different endings of the game can be vaguely named “faction endings” since will be an ending caused by your choices and actions over factions. What exactly are those factions, and how are their so-called characteristics? Thought you would never ask, let’s move on to that subject.

Mayhem Universe has its own factions that rolling around and living in their own style. There are 4 factions and their stereotypes that we will mention in this article. Listed as: Stronghold, Codex Entertainment, Brotherhood, Feller Corp.

The organization Stronghold, which includes the heroes, is a kind of special law enforcement agency, mostly made up of metahumans. Although they are introduced to the public as superheroes, they are law enforcers. However, the style of the uniform may be specific depending on the officer. This faction is where our “Heroes” belong, Star, Trouble, and Dolphin. Talking about the minions of Stronghold, dressed formally, self-confident, tactical, and well trained. Stronghold members have diverse superpowers such as telekinesis, super-speed, and energy manipulation or just a great discipline and training I guess?. Stronghold fight the cleanest in between all 4 factions, after all, they are officers, at least let’s hope they are aware of it. They use Tonfas and riot shields as weapons. Also, metahumans of Stronghold have very unique powers of their own, let’s not spoil them. 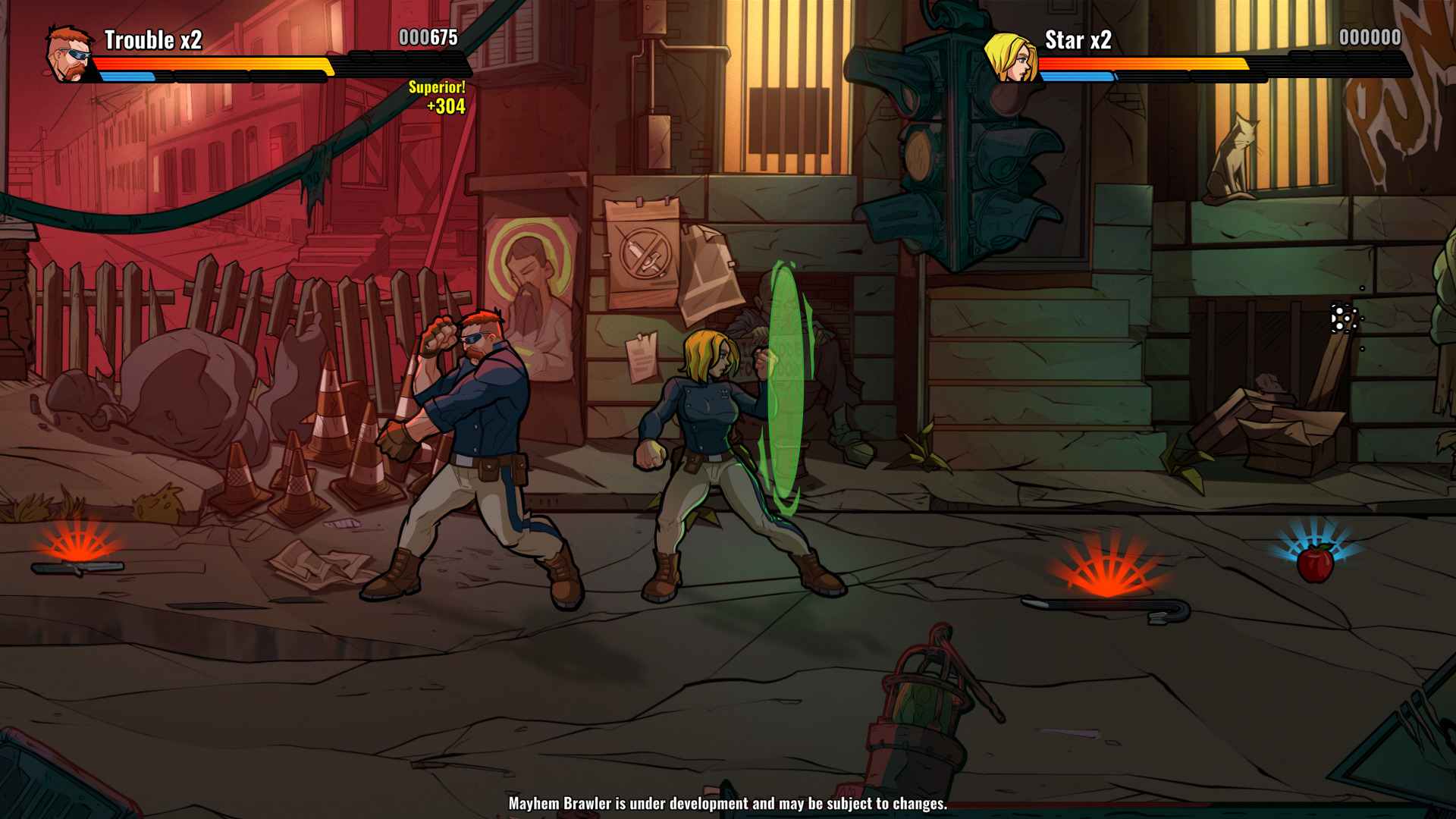 Codex Entertainment faction is a faction of magic practitioners. Known esoteric but that turned out to be false information about magic with recent times. Actually, magic was something that gets powerful as you use it more creatively, so it became a subject to subculture. With magic getting common, Codex Entertainment got stronger. Codex Entertainment members are mostly humans of this world but on the other hand, there are Mejins too. They are refugees from another magical dimension. As it is understandable from their practices, Codex Entertainment keeps it ranged with a few close combat skills. With their own unique style of combat, fighting CE members such an experience. 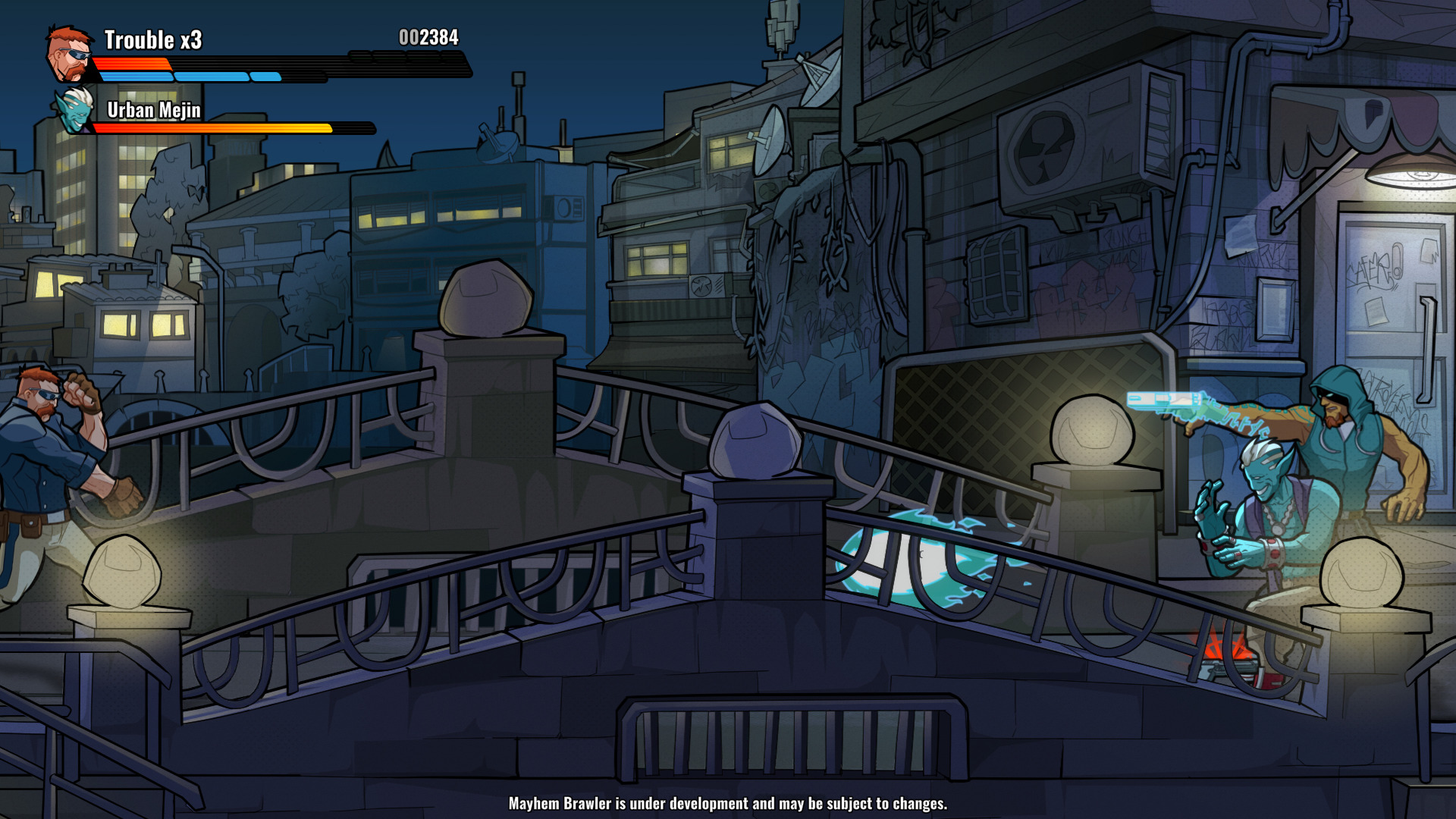 Remember the conspiracy theories of elder people from ‘states? “3 families run the world”, “they are gonna chip us with the vaccines”, “they are leaving mind-controlling trails with planes”. Well here is a literal conspiracy theory evil organization, Feller Corp. All members of this faction are vampires from big and powerful houses. Feller Corp controls media and big money sources. They keep enterprises and big businesses under their influence. Vampires are also members of society but it’s very uncommon to see a vampire in the low economic class, they care about their families and bloodline. With the strong common image of a “vampire” in the urban fantasy genre, our perspective is something similar. They wield blades, katanas, uzis, and such physical attacks as leap and blood suck. Combat behavior is most likely close range exotic attack combinations and ranged attacks with firearms. 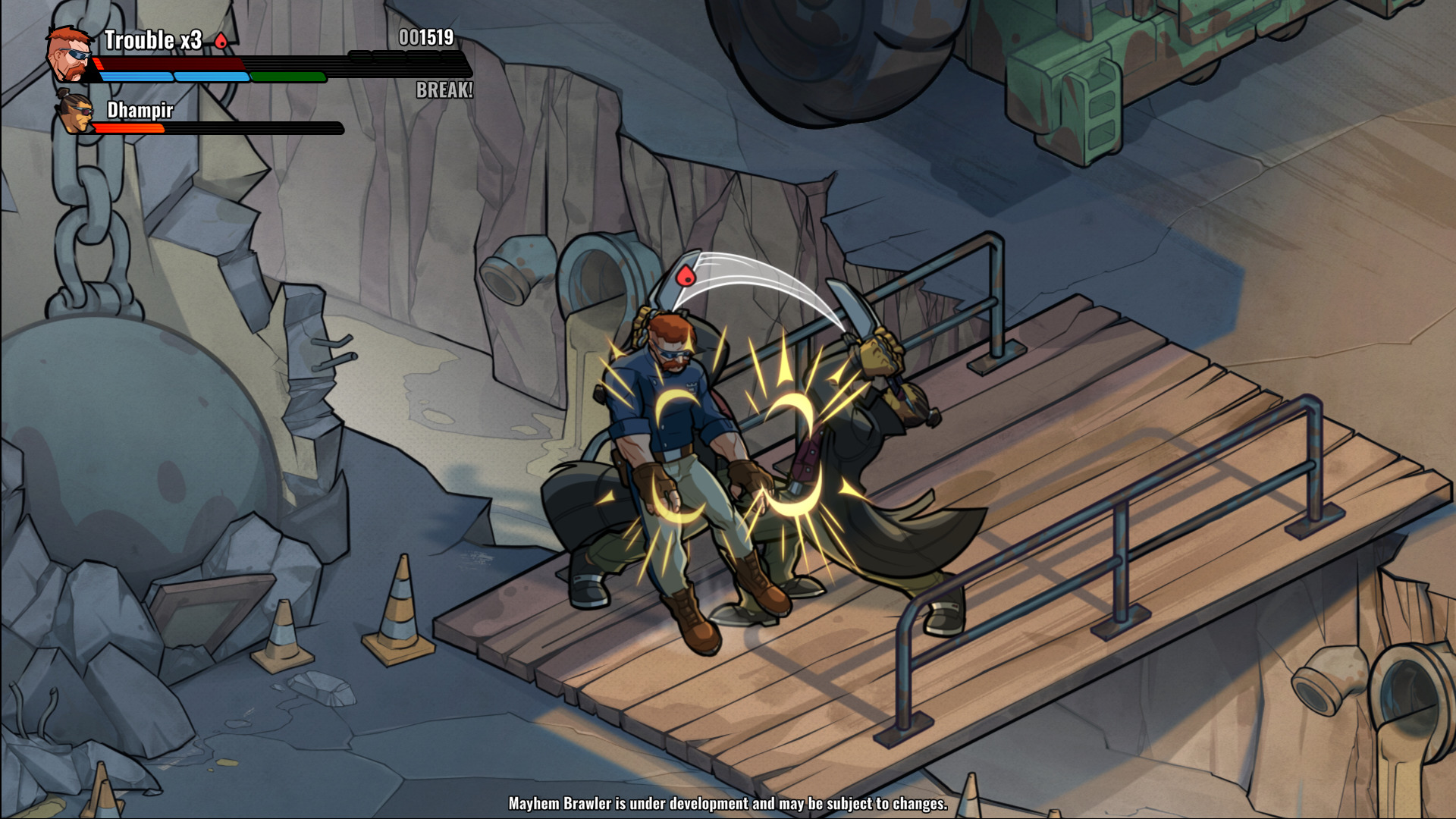 Where is the badass Underground Crime Organization in this universe? Well, here they are. Brotherhood is a faction of lycanthrope and they do pretty criminal things underground. Due to their feral nature, they can’t really blend in with normal street communities. They have separate factions in their own caused by their “racial” differences such as wolf, crocodile, etc. Some of them live in the streets, sewers, suburbs, or wilderness. Their looks keep them unemployed and away from society so they mostly wear clothes they find around or not wear at all. A very few lycanthropes have “human form” or can “partially transform”, they just blend in society. Fight behavior is as expected, using their claws or animal advantages they perform extremely dangerous attacks. Preference is at close range, but some of the lycanthrope enemies can control their own kind, so companion calls or raids can be expected from them. 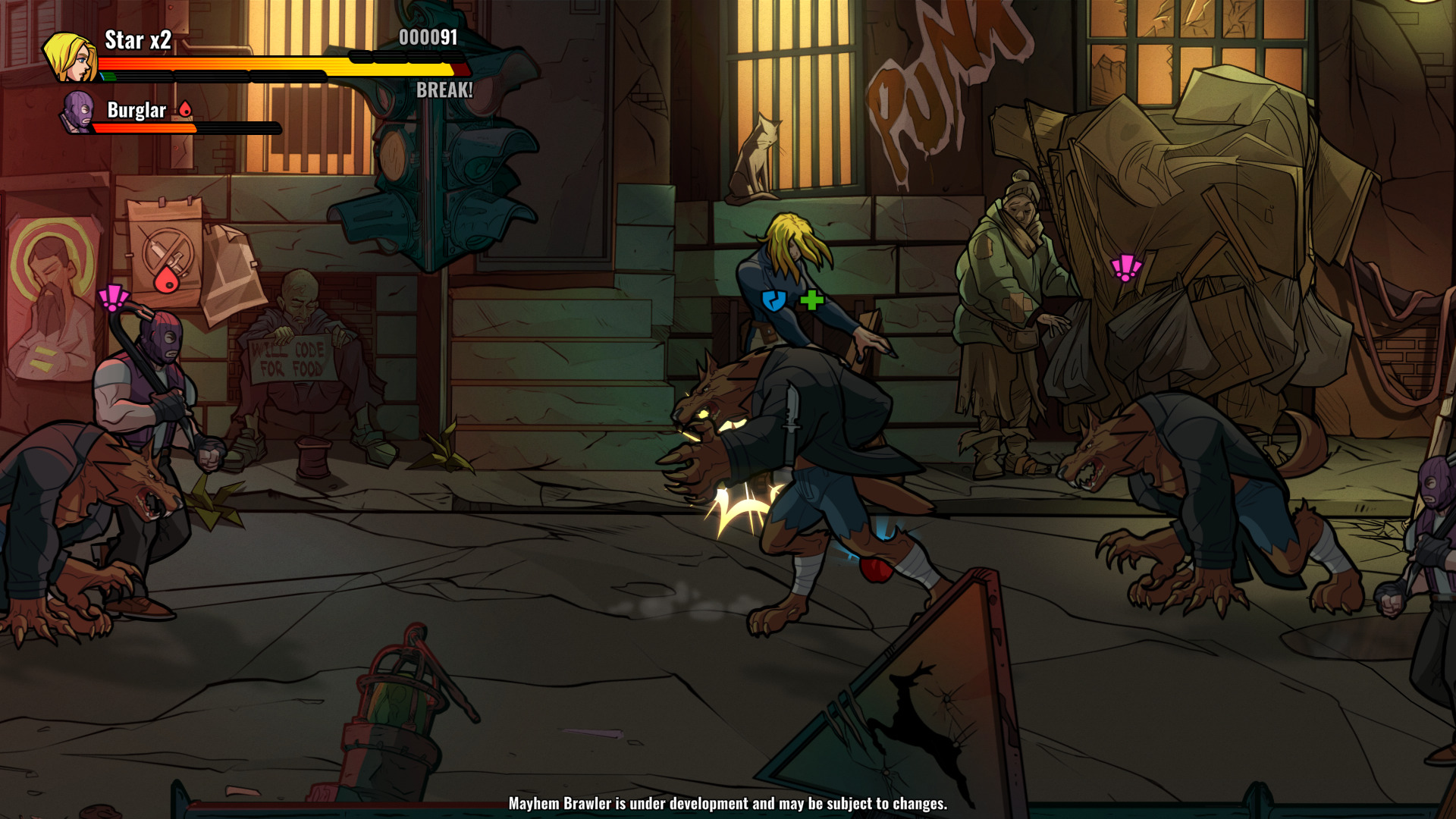 (Also, they don’t like the jokes about veterinary and leash.)

Actually yes, we have a neutral faction that we didn’t mention earlier in this article. They are Thugs, Punks, and Hired Guns such as mercenaries. Neutrals just get involved in trouble by hook or crook. They punk around and get hired by any faction for getting their dirty work done. Also, on the technical side, they were very useful for us. For example, if we didn’t have any neutral characters players wouldn’t face any close-ranged enemies in Codex Entertainment levels. Neutral minions have variants to look like the faction they are working with but their choice of weaponry or fight behavior stays the same. They mostly use any close-ranged weapon they find, on the other hand, mercenaries will be using long barrel rifles or handguns. 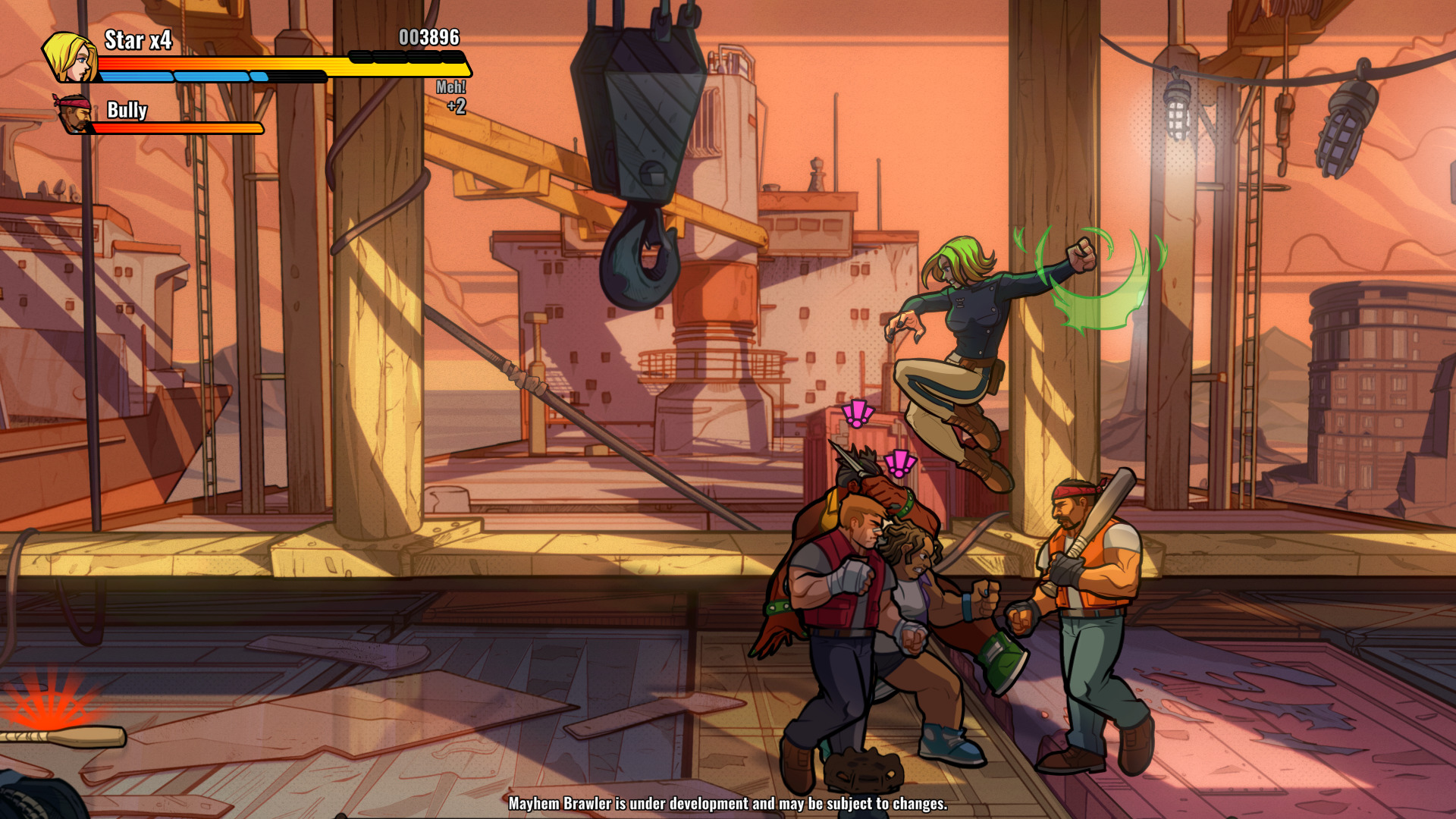 In the next episode of Mayhem Brawler Developer Diary, we will be talking about Boss designs of Mayhem Universe in a more technical way.