Hello Brawlers! Today, we will talk about the boss design process of Mayhem Brawler but a little more technical than other developer diaries. Everyone knows that bosses are what we are expecting to beat and progress in every Beat ’em Up, wait, in every GAME!

Idea Behind The Boss Design

Just like the general enemy design we talked about in Mayhem Brawler Developer Diaries Part 4: Enemy Design, the boss design is also driven by the story. Instead of creating a skillset and moves then designing the boss, we created the boss over the story been told and their looks, their physical capabilities, and mentality. The boss is the core factor of the whole level, everything leads us to the part we face with the boss and usually, our main purpose at the level is to bring that boss to the heel because they are usually the leader/commander of the minions in that level.

Fighting With The Boss

As we mentioned in the previous dev diary, we wanted the story to drive art style and game mechanics. So when we are designing them while they are representing a theme, we didn’t want them to be repetitive. So we used some new techniques and improved some touchstones of the Beat ’em Up genre. In Mayhem Brawler, it’s not a big deal to fight with the boss one-on-one take. It just takes to learn a bit of the boss’ pattern. Other Beat ’em Up title bosses are mostly a pain to deal with because they have a ton of iFrame one after another. Instead of using an extreme amount of iFrame and causing the repetitive boring boss fights, we decided to make our own ways.

The traditional Beat ’em Ups separate the boss from the non-boss enemy in another simple way. You direct the non-boss enemies but bosses direct you the way they want because of the iFrame at least half of the time. But in Mayhem Brawler, we wanted the player to feel free as much as possible. So we have a phasing mechanic instead of excessive use of iFrame.

It’s been a tradition for to bosses having an “iFrame” (invulnerability) during certain moves. During the iFrame you only could run away, otherwise, you would get smashed, also the enemy wouldn’t take any damage. We can’t say we don’t have the iFrame either.

But! Our bosses have a special move called “Payback” (which is also called Combo Breaker). During the payback, our bosses are invulnerable as well. Boss’ next move right after standing up is “Payback”. (also a few Minions and Lieutenants have this skill as well). Payback works like this: If you are waiting in front of the boss for attacking it straightforward, Payback will trigger and you will be schooled about it with a huge combo. We tried to get more creative with “iFrame” usage and as purified of it as possible.

Mayhem Brawler bosses have phase mechanics that affect their fighting style and surroundings. Phase changes after the boss lose 1/3 of its HP bar. While entering the 2nd and 3rd phases, all bosses call for help, and a wave of minions/lieutenants of its faction* rush to aid the boss. (See Mayhem Brawler Developer Diary Part 4: Enemy Design)*. Also, a new phase means a new skill set for the boss.

A Phase 2 Life Bar That Belongs to The She Wolf And Means Now She Wolf Is Using Phase 2 Skills And A Pack Came For Aid.

In the last phase (3/3), while you are performing a combo on our bosses, they just perform a move called “combo breaker”. Boss enters the invulnerable state and performs an attack to break the player’s combo and cause a knockdown. So it makes the player need to gather another strategy for 3rd phase of every boss. Of course, you can see the indicator over the head of the boss and block the attack right in time or dash away. In Mayhem Brawler, there Is never just “one way”.

What sets the “good” Beat ’em Up player from the average joe apart is combo styles. Average Joe always tends to nosedive the enemy and perform an unending combo until the boss dies a triple death and resurrects from the 7th layer of hell and dies again. But that won’t work while the combo breaker mechanic is around. Also, I would like to remind you we have a feature called “anti cheaper”* as well.  (See Mayhem Brawler Developer Diary Part 2: Combat)*. 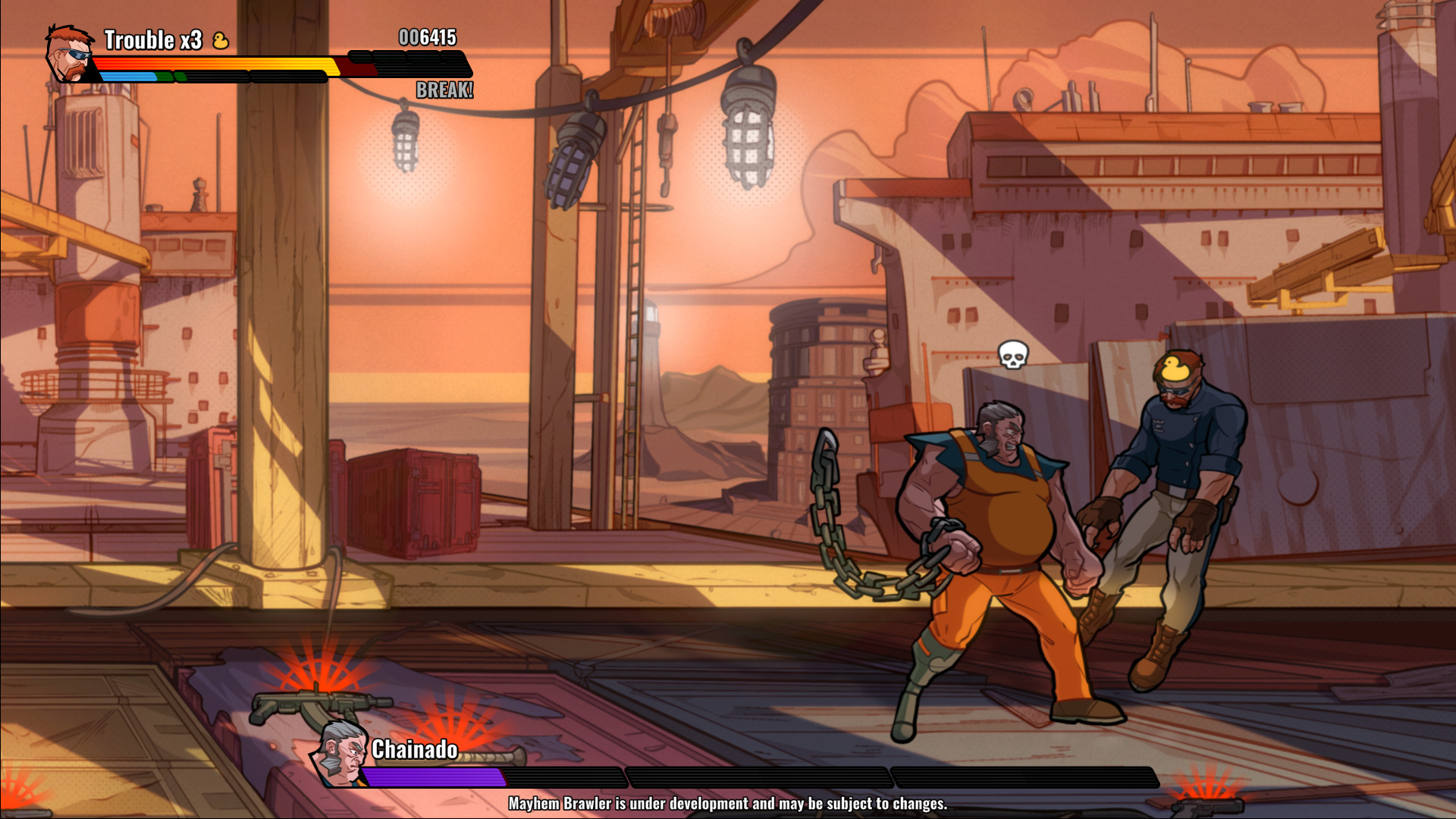 In Mayhem Brawler, it doesn’t matter if a character is too heavy or too slow, they will just find a way to get closer to you with a “Slide/Dash Attack”. Slide attack is not always sliding from the ground such as “Punk” and it’s variants*. (See Mayhem Brawler Developer Diary Part 4: Enemy Design)*. “Slide/Dash Attack” is a way for some minions and bosses to get closer to the player with a swift attack over a linear direction. Such as the “Pogo” move of Heavy Caster which is a flying shoulder bash. So the player needs to react for “Slide/Dash Attack” either with a jump, dash away or block. 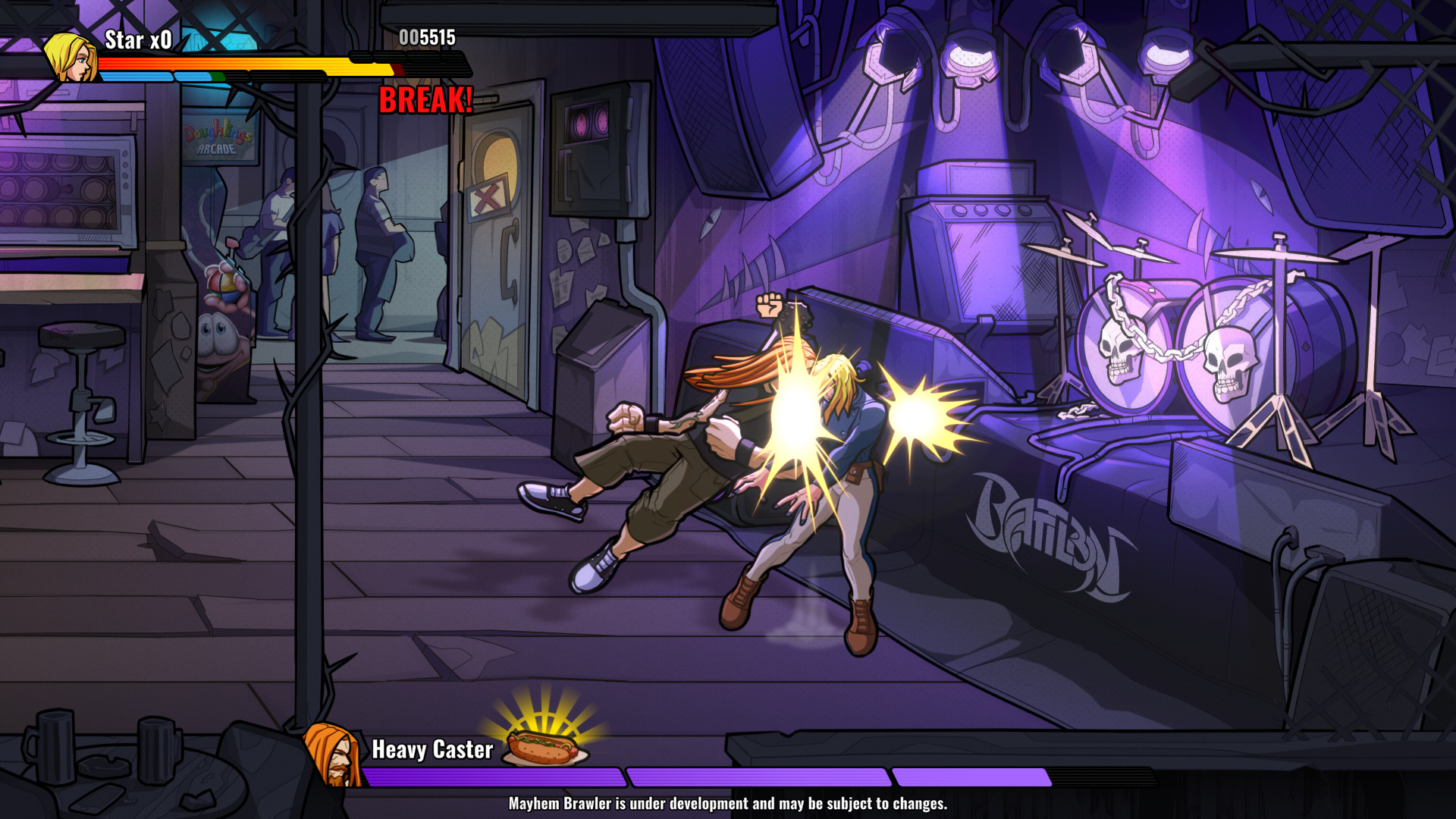